Our primary research interests focus on the interface between human and machine to create new devices, robotics, and systems for wide range of healthcare and biomedical applications. We carry out the interdisplinary research mainly experimentally through the combined efforts in materials engineering, biofabrication techniques, electronics and sensors development, and computational modeling. Specifically, the current research topics include

Engineered living systems is a rapidly emerging field where functional biohybrid robotics are built by the integration of living cells or tissues with engineered scaffolds for countless technological applications. Inspired by the early embryonic heart, we have developed the first example of biohybrid valveless pump-bot, capable of pumping fluid powered by engineered living muscle tissue. To mimic the complex feedback circulatory system, we further developed an adaptive, autonomous pump-bot with flow loop feedback, which could not only dynamically response to the environmental signals, but also adaptively manage its pumping performance based on the feedback. However, almost all the currently developed biobots do not have the real control system. We further developed the first hybrid bioelectronic robots (eBiobot) equipped with battery-free and µ-ILEDs for wireless control and real-time communication. The resulted bio-bots may have broad utility and impact in biomedical applications, such as drug delivery, biomedical devices, biomedical implants, and more. 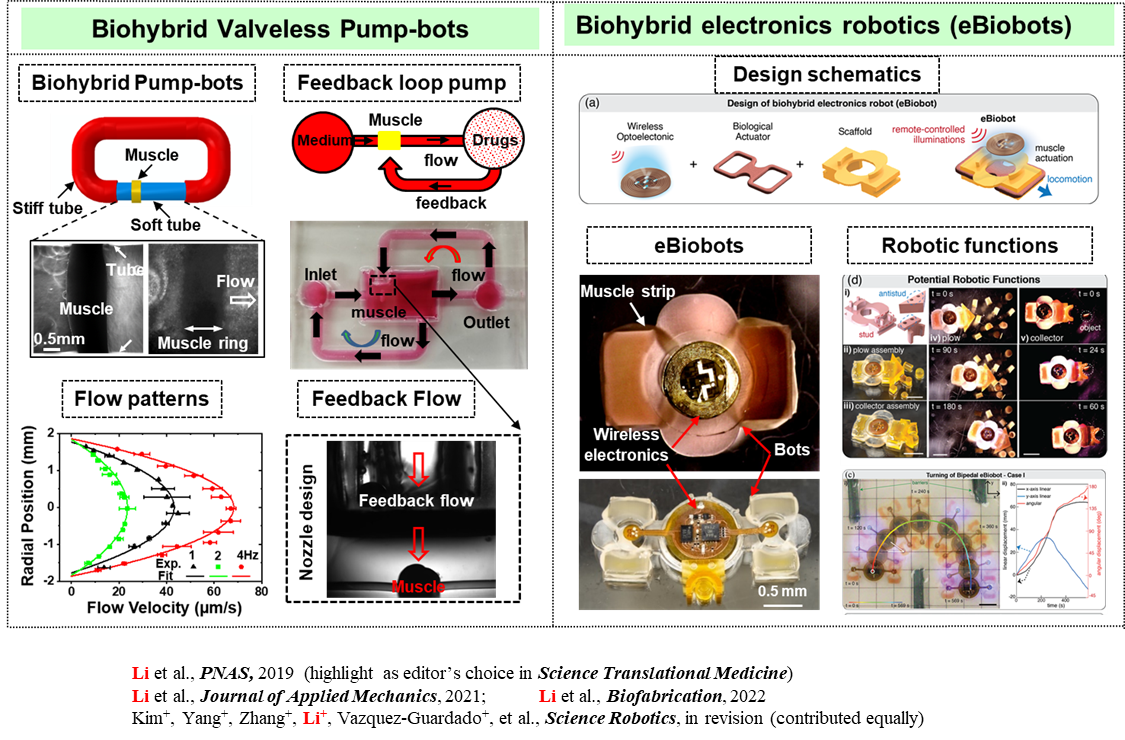 Electronic devices are typically manufactured in planar layouts, but many emerging applications, from optoelectronics to wearables, require 3D curvy structures. One example is the artificial compound eye camera, which offers nearly infinite depth of field and a full 180-degree field of view, by mimicking the structure and functions of apposition compound eyes in nature. Designing an elastomeric microlens array that can be mechanically deformed into a spherical shape without deteriorating the optical performance is critical to this development. We have extensively studied the coupled mechanics and optics and found out an optimal design to meet both mechanical and optical requirements simultaneously. Although promising, there are still very limited success to fabricate the high quality 3D curvy electronics due to the lack of effective manufacturing technology. We further proposed a conformal additive stamp (CAS) printing method by utilizing an inflated balloon as a conformal stamping medium to reliably fabricate 3D curvy electronics. Using this new method, we then successfully fabricated hemispherical solar cells, multifunctional smart contact lenses, and curvy kirigami imager with high pixel fill factor. 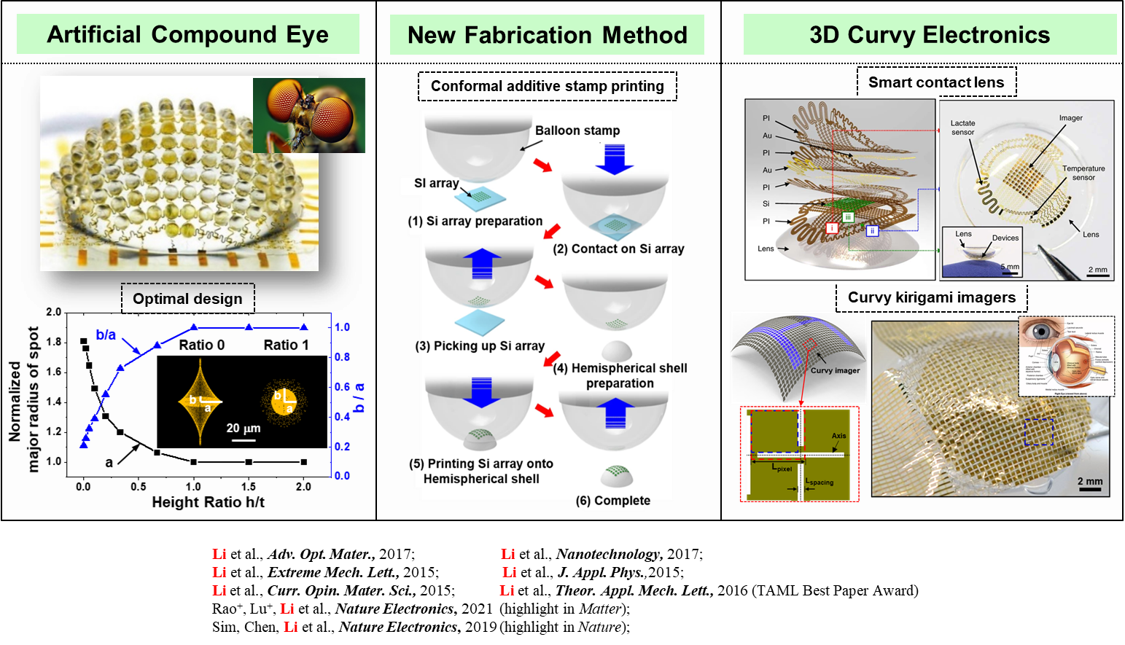 Quantitative measurements of biophysical values are crucial to a broad range of applications, such as biomechanical modeling, physiological monitoring, diseases progression and diagnosing. We developed a series of novel  biosensors and medical devices for cellular, tissue and human body levels of applications. We developed an elastomeric ultra-sensitive sensor with a resolution of 1nN to directly quantify single cell traction and matrix remodeling in 3D. We developed a portable pen-sized instrument, named EPen: Elastic modulus pen, to quantitatively measure the elastic modulus of soft tissues, particularly the diseased tissues such as tumors for prognosis. Furthermore, we also worked on the engineering design and optimization of a miniaturized, automated system-soft skin hydration sensor for rapid and wireless measurements of hydration levels in healthy and diseased skin, which can yield important insights into dermatological health and skin structure and function. 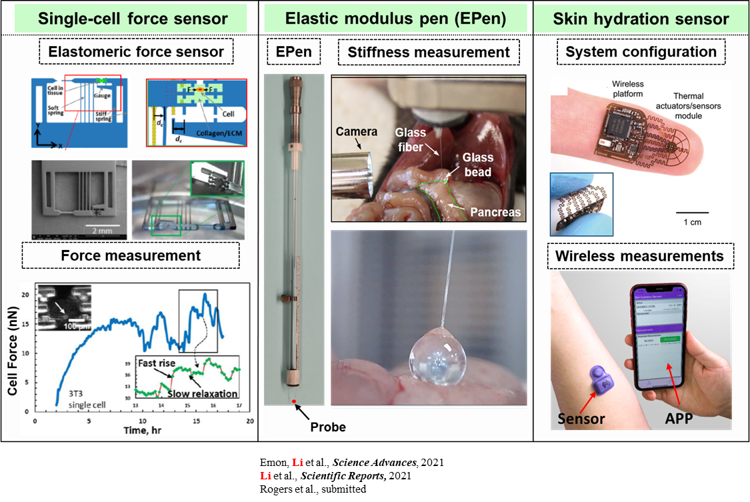 We are also interested in the fabrication and applications of flexible bioelectronics which can serve as high-performance electronic recording and stimulation interfaces to the brain and other parts of the nervous system. We are currently fabricating the ultrathin penetrating neural probes that can be embedded inside a real octopus to record neural activity, which is looking to advance the frontiers of AI, control, and robotics, by learning from the brain of octopuses.